Since I was a child I used to go with my friend Benjamin Roselló and his father to the mountains near Santiago. There was one particular weekend in April 1995 when we had a whole different adventure. That day in the Andes awaked a deep feeling of admiration and respect for the mountain, a simple sensation of peace that I experience on every new encounter.

It was very early in the morning and still dark when we headed by car to the Maipo Valley. Santiago was still sleeping when we went driving through this immense drawer deep into the Andes, along a road that would lead us to Las Arenas Valley, the starting point for our hike. I even remember how the first rays of dawn dimly began to touch the mountains, showing us little by little incredible colors and gigantic walls that never failed to amaze me. At that time the road didn’t reach as high as it does today, which is why it took us practically all day to walk to the camping site. The long but amazing hike was impossible to forget, as well the terrible cold that we experiment on that night. I remember how Benjamin and I had to cuddle up near the camping stove almost to the point of touching the fire, while his father walked nonstop pacing from one place to another, like a caged lion, to produce his own body heat. Finally we fell asleep tremendously cold and exhausted.

The next day was simply magical as well as unexpected. A radiant sun invited us to leave the tent and witness the majestic beauty that presented itself before us for the first time; the jaw dropping glacier El Morado was possibly the most beautiful thing I had seen in my short 10 years. 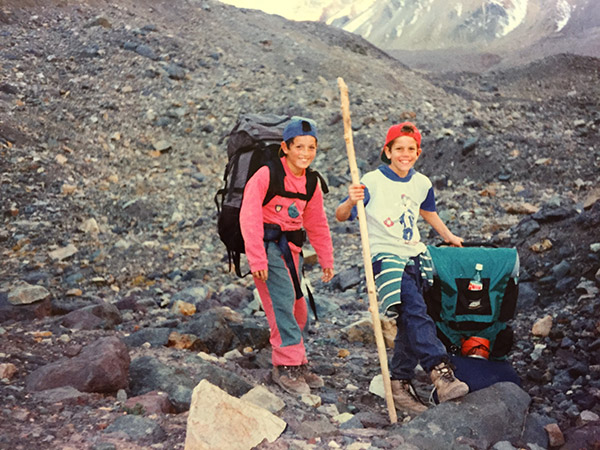 Benjamin and I ready for the adventure. 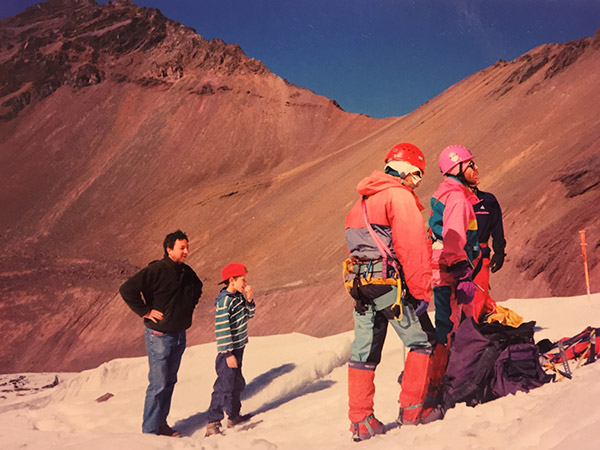 Benjamin's father and I joined by a couple of old-school ice climbers. 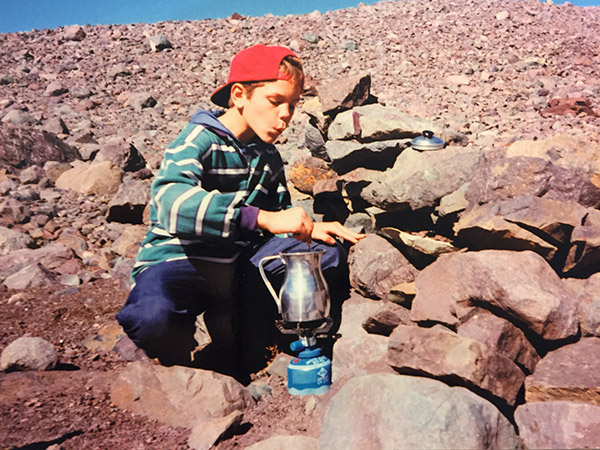 Melting ice with the stove that I appreciated so much the night before.

The Morado hanging glacier is a tourist attraction that many foreigners visit all year round to be delighted by its immense 800 meter high wall (2,625ft). In addition, it contextualizes relevant geological aspects that are worth considering to increase its value beyond its beauty and majesty.

This, as well other 998 glaciers registered in the central zone of Chile, is a modeling agent and witness of the geomorphology that characterizes the Andes mountain landscape on these latitudes, and in turn it is also a remnants paleoclimatic indicator that marks the transition between the last glacial age and the present times of interglaciation. Additionally, it is vitally important to consider the role that these bodies of ice fulfill as a strategic water reserve; provision of fresh water for the human being, local agriculture and the ecosystems that depends on it, especially during the dry and hot summers seasons. 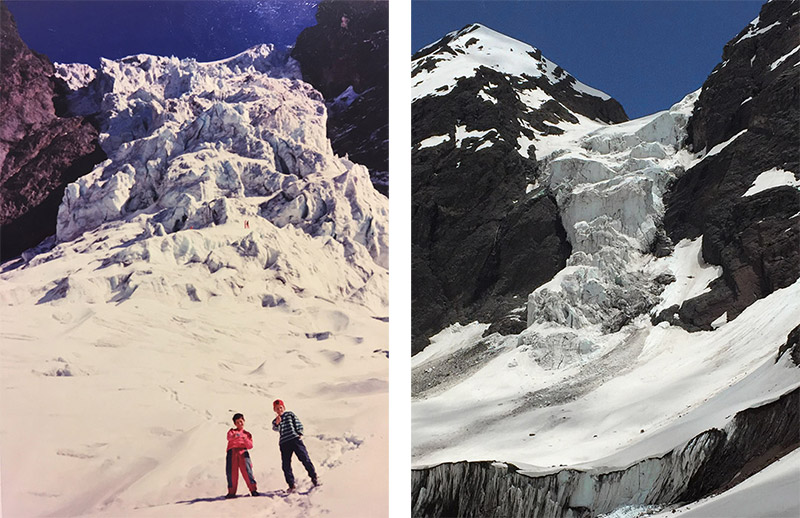 The first photo was taken in April 1995. On the right, a recent one taken in the same month, but 21 years after. The Morado, due to its “small” size and exposure that can allows a good visualization of its magnitude, is a very reliable element to study the atmospheric variations of the sector in the last years, as well as its dynamics and trend proper. This can be carried out by taking periodic photographs at specific times, such as in summertime, when the snow melts down, exposing the ice below. The Google Earth program has a tool that allows us to view satellite photos of a same place on different dates. Can you identify the ice climbers on the first photo?

The formation of glaciers is due to a process of compaction, loss of air and crystallization of snow (Peterson, 1994). In order to form, the amount of snow fallen in the winter season must exceed its melting during the season of low precipitations and increased temperatures. In this way, as the years pass, a layer of snow is superimposed over the already fallen, which is compacted by its weight, forming ice crystals and eliminating the oxygen that it contains.

Glaciers shelter the 68.7% of fresh water on the whole Planet (Earth water distribution, USGS), making up for 10% of the total land surface, 99% of which is located in polar ice sheets, mainly in Antarctica.

With respect to mountain glaciers, they present a dynamic aspect very similar to that offered by rivers. Although both flow by gravitational force and their speed will be determined by the slope and friction (with more speed in its center and surface), the movement of the glacier is carried out by a much slower movement, like watching a video of a great river in slow motion. Also, the mass of ice generates a huge force of friction on the lithosphere in comparison to the water in liquid state. Glaciers are much more denser and heavier, which effects their great capacity to configure and transform the landscape. There is a relative trend that allows us to determine the origin of a valley; when these have U-shape, we refer to them as a glacial valley, and when its geography looks more like a «V», we can deduce in many cases that a river was the main modeling agent of that landscape.

It is well known that mountain glaciers are experiencing setbacks because of the increase in temperature of the whole planet on the last years. However, many studies can teach us that this process is taking place much quicker that was previously thought. Of the 24,114 glaciers located in Chilean territory (MOP, Government of Chile), all of them are retreating, except for one which continues growing independently of the global warming situation. This glacier is Pío Xl, with an area of 1,265 km², it’s the largest glacier of the chilean territory, a characteristic that partly explain this peculiar situation. Another huge glacier, the largest in Chile outside Patagonia, is The Olivares glacier. It is the most studied one of the central zone and is located just 60km (37,8mi) north of El Morado, which is showing an alarming tendency to disappear; «…Because of its proximity to the city and the contamination of Big Santiago, as well as the activities of nearby mining and hydroelectric power plants, there has been a 30 percent ice drop since the 1970s«, Explains Cedomir Marangunic, a glacier specialist, in a report for Domingo magazine. 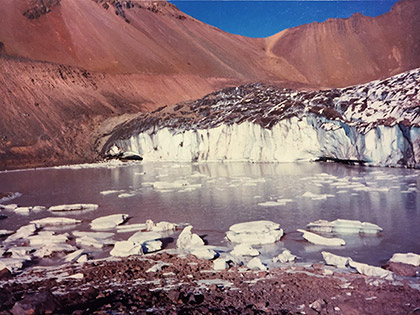 In the photograph above (taken in 1995) we can see the lagoon shaped by El Morado. These bodies of water in liquid state can be seen in multiple glaciers, such as the Grey Glacier (located in Torres del Paine National Park, Chilean Patagonia) which are technically known as proglacial lakes. They are produced during the continuous advances and retreat of glaciers, which drag materials forming moraines and undermining the rocky bed. When the body of ice recedes as it melts, it releases the water which is contained in its drainage basin, which is dammed between the moraines and the same glacier. In this case there is an ice front with detachments that end up drifting in the lagoon until they melt. These pieces are well known as icebergs.

Though the ice fields´ vital role as strategic water reserves is recognized, in many cases as the only source of fresh water in times of drought, I am unhappy to note that the Chilean government has not yet passed a law to protect them. Without a doubt the Morado Glacier is going to disappear, and not in the distant future. In this way is worth relating the vast age of a glacier compared to the longevity of the human being. We will probably be the last witnesses of what once covered most of the southern territory. 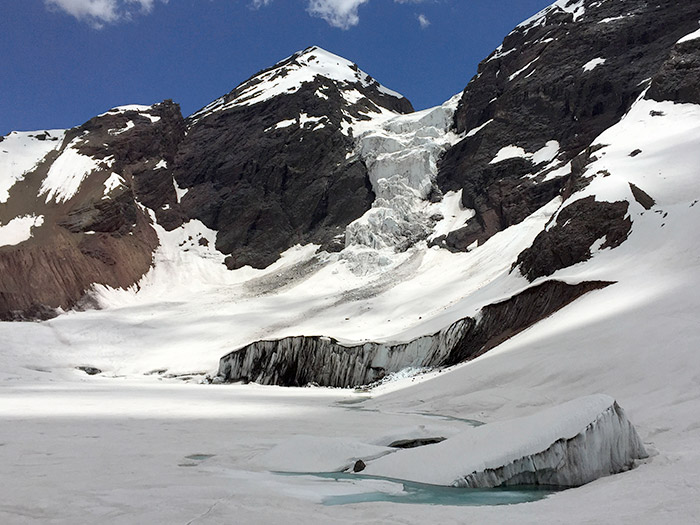